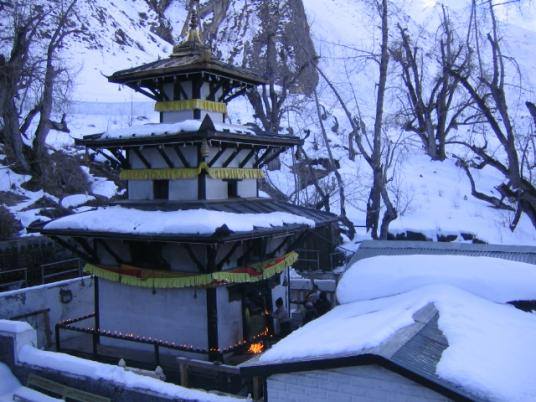 Hindus call the site Mukti Kshetra, which literally means the “place of salvation” and it is one of the most ancient temples of the God Vishnu and the Vaishnava tradition in Nepal. The shrine is considered to be one of the eight sacred places known as Svayam Vyakta Ksetras (the other seven being Srirangam, Srimushnam, Tirupati, Naimisharanya, Totadri, Pushkar and Badrinath), as well as one of the 108 Divya Desam, or holy places of worship of Lord Vishnu. Additionally, it is also one of the 51 Shakti Pitha goddess sites.

The Muktinath temple is small and contains a human-sized golden statue of Vishnu as Shri Mukti Narayana. In addition to Mukti Narayana, the temple has bronze images of Bhoodevi (the Earth-goddess form of Lakshmi), the goddesses Saraswati and Janaki (Sita), Garuda (the mount of Vishnu), Lava-Kusa (the sons of Rama and Sita) and the Sapta Rishis (Seven Sages created by Lord Brahma). There is an old Buddhist monk present in the temple and worship is conducted by Buddhist nuns.

One of the many questions people that are traveling to Muktinath ask is how to get there & what will be the best time of the year to tour Muktinath temple. Located at an elevation of 3710m above the sea level, Muktinath is certainly one of the most sacred and religious shrines of Nepal. It’s placed on the bottom of Thorong La which is an entrance to the grand Himalaya locating in between Nepal and Tibet. A great number of people worldwide today look for to Muktinath Darshan Tour to get liberation or Moksha.

Muktinath is 1 of the eight holy temples for Hindus worldwide. Besides carrying its own spiritual significance, this region also provides a stunning sight of the royal Himalayas & the surrounding around. Although Mustang is recognized as the desert of Nepal, the mesmerizing panorama of the place will leave you speechless & make you come here again and again.

As far as reaching Muktinath is concerned, it can be accomplished either via jeep or flight. If you’re fit enough you can also trek Muktinath. You can go for a direct fifteen minute flight from Pokhra to Muktinath. Or either opt for a jeep or bus to get there. Travelers can tour Muktinath any time of the year. However, as the area locates in 1 of the Himalyan provinces of Nepal, you may have to encounter unfavourable climate condition if you get there on the inappropriate season accidentally. Hence, the ideal time to tour Muktinath is either from March-May, or September-October. Tourists can explore it after February and before November. June-August is the monsoon month when you’ve to encounter pretty heavy downpour. SO, it’s wise to ignore visiting Muktinath throughout the rainy months as the roadways are rocky and you may encounter unforeseen difficulties here. Besides rainy month, it’s also wise to ignore visiting Muktinath during the winter season. Particularly during December & January. Throughout this period, temperature drops to minus degree Celsius.

If travelled throughout the spring season which begins from March-May, you can completely relish the incredible backdrop around. You would not have to concern regarding any of the weather risks. There’ll be greenery everywhere with lovely buckwheat plant. There’ll be plentiful different attractive panoramas one would wish to explore it daily. If explored around September, you’ll get to witness those magnificent orchards throughout. However, if you are adventurous enough, you will like to visit Muktinath any time of the year.

No matter whether you are going for Muktinath Helicotper Tour or Muktinath Jeep Tour, you will be always delighted by the spiritual things available here.

It’s said that all sorrows/miseries are alleviated once you pay a trip to the Muktinath Temple. The popular shrine of Lord Muktinath locates in the province of Mustang & is positioned approximately 18 kilometers north-east of Jomsom at a height of 3800m. The major temple is a pagoda-shaped shrine devoted to God Vishnu. Sets into fence around it are 108 whirlwind from which sacred water pour.

The shrine is positioned on a high-mountain range & is toured throughout fair climate. There’re 2 ways to arrive at Muktinath from either through a flight journey from Pokhra-Jomsom & trek for 7 to eight hours from Jomsom or hike all the way from Pokhara via Kali-Gandaki gorge, which requires 7 to eight days. It’s said that one must travel this shrine after accomplishing pilgrimage of 4 special spiritual sites in India. This shrine held divine by both the Buddhists and Hindus. The Jwala Mai shrine close by features a spring & a never-ending flame nourished by organic gas belowground. Jomsom is a premier center in the Annapurna province. There’s a world class lodging amenity in Jomsom from where you can relish natural splendor.

The most ideal for Muktinath Temple tour is from March-June and September November is a best time. In November  to January it will get cold out there, but you can visit. December & January are ideal for the adventurous people as snow fall happens in all areas. June-September is the rainy month.

If you are not capable enough to walk the steep road, you better check out Muktinath tour by flight. There are several tour operators that are offering flight trip for Muktinath yatra. Otherwise you can look for a jeep tour to explore all the sightseeing it has to offer.

Muktinath is a holy place and you must come here at least once in your life time to get moksha. Last but not the least always choose a reputed tour operator for the best possible experience.

Muktinath is a sacred place for both Hindus and Buddhists located in Muktinath Valley at an altitude of 3,710 meters at the foot of the Thorong La mountain pass (part of the Himalayas) in Mustang, Nepal. The site is close to the village of Ranipauwa, which is sometimes mistakenly called Muktinath.

Established with the theme of providing quality service, Muktinath Temple Tour is one of the pioneering organizations in developing the concept of meaningful Muktinath Yatra. With high reputation and standard service we have catered thousands of prestigious clients where our clients’ satisfaction has always become our top most priority.

We work with different professionals at different levels who work round the clock to make your Muktinath Darshan tour a success. Our company is registered with Nepal Government and associated with many organizations. From logistic management to facilitating you with information; we adapt our client according to their needs focusing on effective and efficient service.
Your Mukthinath Darshan will be completed by all flights from Kathmandu to Jomsom via Pokhara and return. This trip fulfills your dream within five days. You can make unforgettable Yatra of Muktinath, Pashupatinath and many temples Darshan and sightseeing in Kathmandu, Pokhara and Muktinath.

The Muktinath Temple is considered to be a Shakti Peetha for a yatra. Shakti Peethas are sacred abodes of Shakti (primordial cosmic energy), formed by the falling of body parts of the corpse of Sati Devi, when Lord Shiva carried it and wandered. There are 51 Shakti Peethas revered by Shaktism, connecting them to the 51 alphabets in Sanskrit. Each Shakti Peetha has a Shakti shrine and a Bhairava shrine in its temple. The Shakti of Muktinath is addressed as “Gandaki Chandi”, and the Bhairava as “Chakrapani”. Sati Devi’s temple on the forehead is believed to have fallen here.

The central shrine of Sri Muktinath is considered one of the eight most sacred shrines for Hindu Vaishnavas known as Svayam Vyakta Ksetras, the other seven being Srirangam, Srimushnam, Tirupati, Naimisharanya, Thotadri, Pushkar and Badrinath. The temple is very small. Muktinath is one of the most ancient Hindu temples of God Vishnu. The murti is of gold and is tall enough to compare with a man. The prakaram(outer courtyard) has 108 bull faces through which water is poured. It is of freezing temperature. The sacred water that flows in 108 pipes around the temple complex denote all sacred Pushkarini waters (Temple Tanks) from all 108 Sri Vaishnava Divya Desams including Srirangam, Tirumala, Vaikunta, where the devotees take their sacred bath even in the freezing temperatures. There is an old Buddhist monk present in the temple. The worship is conducted by Buddhists.

The Muktinath Temple as a Shakti Peetha

The Muktinath Temple Muktinath Yatra Nepal Tourism is considered as a Shakti Peetha. Shakti Peethas are sacred abode of Shakti formed due to the falling of body parts of the corpse of Sati Devi, when Lord Shiva carried it and wandered. There are 51 Shakti Peethas revered by Shaktism connecting them to the 51 alphabets in Sanskrit. Each Shakti Peetha has a Shakti shrine and a Bhairava shrine in the temple. The “Shakti” of Muktinath Shrine is addressed as “Gandaki Chandi” and the “Bhairava” as “Chakrapani”. Sati Devi’s temple on the forehead is believed to have fallen here. The mythology of Daksha yaga and Sati’s self immolation had immense significance in strengthening Shaktism.Sati Devi immolates herself in this mythology. This mythology is the story behind Shakti Peethas.

In front of Muktinath Temple there are 2 Kunda (Water ponds). This is generally used for holy dipping and is believed to hold the power to wash away negative karma and the results of one’s past negative actions.

A little below the Muktinath Temple you can see the Tibetan style Jwala Mai Temple. This Temple is famous for the water that it issues from a rock inside it. Inside this Temple behind a tattered curtain, are small natural gas jest that produce Continuously burning flame, the Jwala Mai temple has a spring and there are three eternal flames “Holy flame from soil”, “Holy flame from rock” and “Holy flame from water” fed by natural gas. Apparently two flames are continuously burning. The Hindus believe that this fire was lit as an offering made by Brahma himself, (the creator) as he set water on fire.

This is a monastery of Tibetan origin. Legend has it that the Syandol Lama, a monk from Tibet founded this monastery. This was actually used as a hostel for monks before collapsed and people of Khinga and Jharkot later restored it. The main deity’s Monastries are Sakyamuni, Chingresig and Guru Rimpoche. The monastery is situated at left from entrance gate of Muktinath temple complex, would be worth it.

A Hindu Guru by the name of Lord Shri Swaminarayan is generally associated with the Temple of Muktinath. Also known as a Satguru of Sabij Yoga, towards the end of the 18th century he practiced severe penance in Muktinath for two and a half months and attained the highest degree of proficiency in Nishkamvrat. In 2003 his followers funded the new wall around Muktinath and raised a small monument for him at Muktinath.

Another attraction for the pilgrimage is the River kali Gandaki from where one can collect fossils of the Jurassic age. You can also buy these fossils from the locals. Shaligram, a black stone fossil if found, is considered sacred and is kept in Pooja (prayer) room in the house. It is supposed to be symbol of Lord Vishnu. Gloriously described in Puranas as Krishnagandaki (Black Gandaki) as well as Chakranadi, and worshipped as one of the holiest rivers, Krishnagandaki consists of seven Gandaki rivers supposed to have sprung from cheek (Gandasthal) of Lord Vishnu.